What is Hinchinbrook Island 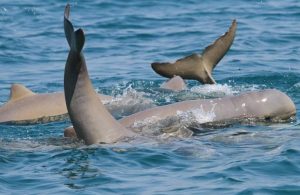 irreplaceable importance in the dynamics of our natural world.  Moreover, Hinchinbrook offers a great number of exciting low impact activities such as hiking through the stunning rainforest, watching varieties of birds along the trail while relaxing on the white shores of its many beaches.  There are beautiful views of the sunrises and sunsets from the very northern end at Orchid Beach to Mulligan Beach in the south.  The oceans around Hinchinbrook are home to some of the worlds rarest mega fauna such as Dugong, the Australian Snubfin Dolphin, Sea turtle, Estuarine Crocodile and Humpback Whales.

A Noisy Pita seen at the Mulligan Falls camp. They have a unique call, ‘Walk to Work’. 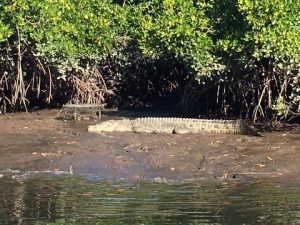 Hinchinbrook is the largest all-island National Park in Australia.  It offers the thrill of hiking through a myriad of different eco systems that overlap each other, making them codependent.  This alone makes Hinchinbook Island worthy of it’s World Heritage status.   Hinchinbrook channel provides a great platform to begin to understand the importance of the Mangrove habitat as it is the key ecosystem that provides the nutrient rich sediment encouraging an abundance of sea grass through the shallow waters of Rockingham Bay… which in turn supports an explosion of life from the miniscule plankton to the large herbivores such as Dugong and Sea Turtle.  It is not a coincidence that these become a food source for Estuarine crocodiles and large predators such as tiger sharks. 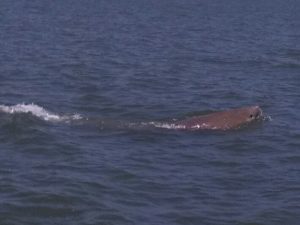 Half way along the dramatic Hinchinbrook Island lies the rugged granite crags forming Mt. Bowen.  To the north-west lies the older volcanic rocks forming the undulating skyline to the mangrove rich location of Hecate Point, 4 km across the channel from Cardwell.  From Mt. Bowen on Hinchinbrook heading north for about 20 km there lies Capes Sandwich and Cape Richards, the most northern point of Hinchinbrook Island.

For hikers and nature lovers, Hinchinbrook Island is always a great destination to choose, where hikers along the Thorsborne Trail enjoy the diverse calls of Herons, Cockatoos, Scrub Hens, Sunbirds and Pied Imperial(migratory) and Wompoo Pigeons with special mention of the endangered Beach Stone-Curlew.  On the northern end of Hinchinbrook nestled between granite headlands is Boulder Bay where large turtles feed on marine growths that cling to the large rock formations beneath the water line.

During our warmer months, Hinchinbrook’s Thorsborne Trail beaches become home for the majestic Manta Ray and large harmless Filter Sharks who feed on the tiny shrimp-like krill that congregate enmasse due to salinity changes from higher rainfall totals, higher water temperatures and calmer weather conditions.  At optimum numbers this krill will turn the shoreline red where they gather in their millions to avoid predators which include very small bait fish right up to the enormous Manta Ray. If water temperatures and rainfall are conducive, this spectacular event can last until JUNE.  Neap tides and calm seas are the best time to view this event.

It is one of the first things I check for when I get up in the morning along all of the beaches of the Thorsborne Trail.

Terrestrial animals are very similar to what exists on the mainland with some exceptions.  For instance, no Cassowary’s exist there, nor do our native brush turkey, so when you see the large mounds, you are looking at the nest of the Orange-footed Scrub Fowl, not the native Australian Brush Turkey.  There are a few of these nests close to the trail between Zoe Bay beach and Zoe Bay falls. Otherwise, Wallabies can sometimes be seen out on the beaches especially at George Point.  During our winter months it is quite common to see Echidnas sticking their nose down a ghost crab hole on Hinchinbrook Island beaches. 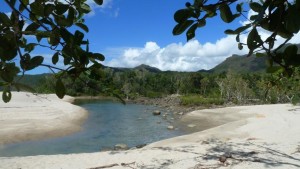 Hinchinbrook represents one of the finest examples of successful Government regulation, this in turn adds to the unique experience hikers enjoy while trekking the Thorsborne Trail on Hinchinbrook Island, Australia’s grand jewel in the crown of Australian tropical Islands.

Absolute North Charters has been a very reputable service provider in all aspects of hiking, travelling, tours, ferry transfers over the entire region of Hinchinbrook  from both Cardwell and Lucinda at a very affordable price.  With an unmatched local knowledge about the Thorsborne Trail, Absolute North Charters assists Hikers with all of their logistics and safety tips whilst on Hinchinbrook Island providing maximum hospitality to his clients.

EXCITED about adventure at Hinchinbrook?, Check Out our HIKING or DAY TRIP options..