How to Get to Hinchinbrook Island

Get to Hinchinbrook Island. Hinchinbrook Island is situated on the north-east coast of North Queensland. Thanks to the preserved natural heritage, the island attracts a lot of people including hikers almost year-round. Being a tropical island, winter offering the most comfortable weather sees a surge of hikers.

Absolute North Charters get asked regularly how to actually get to Hinchinbrook Island. And since we are always happy to answer your queries, we figured a proper write-up would be appreciated by travelers visiting our site looking for suggestions and direction.

In this guide, we will answer the concerns regarding airports, shuttle bus services, and boat services.

Hinchinbrook Island at a Glance

You first need to reach either Lucinda or Cardwell to get to Hinchinbrook Island. Lucinda is on the south of the island while Cardwell sits near the north of the island. The two towns are connected through Bruce Highway that extends to further north and south. Ferry service to the island is available from both town ports.

But before getting into that let’s talk about Airports near the towns. 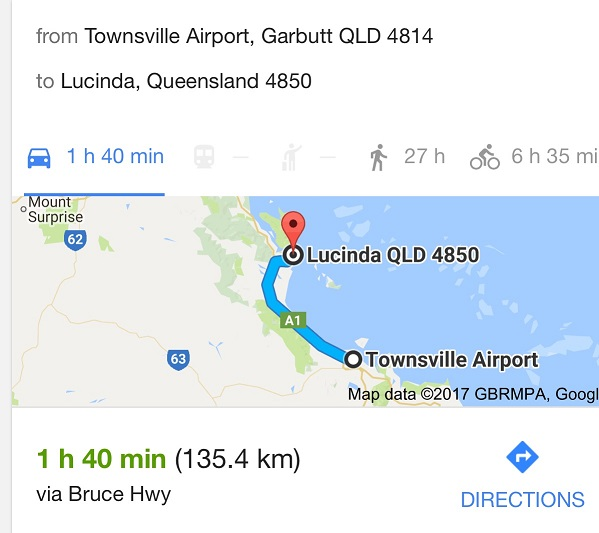 From the airport, bus/shuttle services to Lucinda are available. Buses from Lucinda and Ingham pass through Townsville regularly. This is the most affordable option for people who just want to reach their accommodation in Lucinda.

However, if you are planning to visit other parks in the vicinity than just the island, then hiring a car is a better choice – considering the economic, convenience, and flexibility value together. You can hire a car from any of the major car rental companies in Townsville and self-drive to Lucinda.

Here’s a note for people choosing to drive to Lucinda –

Ingham to Lucinda will take about 20 minutes. You should take a right turn off the Bruce Highway after crossing Ingham, in about 8 km, and then take a left turn at Halifax onto Lucinda Road. Lucinda is actually just 19.5 km off the Highway which takes about 15-17 minutes by car. Some agencies have given inaccurate information to hikers that from Ingham to Lucinda takes 35 minutes. 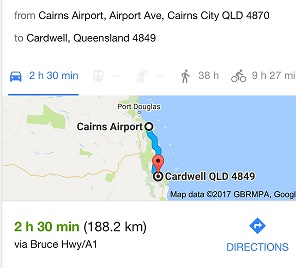 Though the distance is longer, this is a slightly cheaper option for people traveling from Sydney or Melbourne during summer. However, in winter the price goes up and tickets are tough to get since it is the tourism season and Cairns is a hot destination for tourists. So if you’re planning on visiting Hinchinbrook Island during the winter months i.e. June to September, Townsville should be your airport of choice for better deals. But the thumb rule is the same – book your tickets early.

Now, if you land at the Cairns airport then the only choice you have is to hire a car for self-driving as no shuttle service from Ingham or Cardwell is available. This stretch is comparatively busier till Gordonvale with a couple of small regional centers. This will set your car speed to 80 kph at max, especially during peak hours. After passing Gordonvale, you can drive at 100 kph.

People coming from the South-East part of Queensland or Northern side of New South Wales can reach Townsville directly from nearby Brisbane airport as it operates 10 direct flights to Townsville airport daily.

Another ‘nearby’ airport that may offer a direct flight facility is Coolangatta airport.

You have multiple options depending on where you are traveling from. So thorough research will save you money and your energy. Keep your energy and spirit up when you visit Hinchinbrook Island and or begin the amazing hike down the Thorsborne trail.

Get to Hinchinbrook Island by Boat 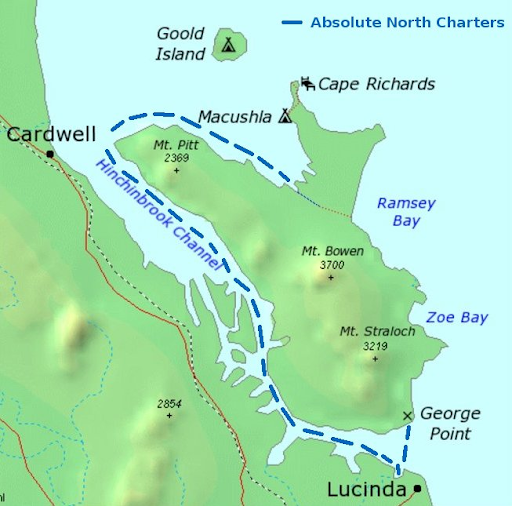 There are two points on the island where we drop and pick up. These are Ramsay Bay to the north side and George Point to the south, the two endpoints of the Thorsborne Trail.

While George Point is 4.37 km from Lucinda, Ramsay Bay is 74.34 km. Compared to this Cardwell is 35 km and 43.73 km away from each respectively. Though it doesn’t seem much of a difference, it is actually!

From our experience, we know that it’s easier to cover longer distances when you have your energy reserve full. Because at the end of the hike you are exhausted and should cover the minimal distance. This option, as per our research and years of experience, is logistically sound, easier on your pocket, and very rewarding.

Nonetheless, we understand Cardwell will still be much more convenient for flyers from the north or north-west. So if you have just Hinchinbrook Island in mind, make Cardwell your base of accommodation.

You can also start the journey from Cardwell and at the end of the hike drop off at Lucinda. Then from Lucinda visit other parks in the region. If you have to return to Cardwell after the hike, then, in that case, you have to take the shuttle via Bruce Highway.

Note that you can hike through the Thorsborne trail from north to south or south to north. Just plan accordingly.

For further information, you may check out our other blog posts or directly reach out to us.